1⁄2
Before moving to Los Angeles in 1999, Karina Corradini already was one of the best-known jazz vocalists in Argentina, a regular at the top venues in Buenos Aires.
But she moved to Los Angeles to learn how to sing like Ella Fitzgerald, and on six of the tracks on Bridge To Infinity, she uses arrange- ments by Erich Bulling, the man who collaborat- ed with Fizgerald on Ella Abraça Jobim. The oth- ers were arranged by bassist Christian McBride, who co-produced the record with Corradini. While the singer leaves plenty of room for the backing band to stretch out, it’s her vocal presence that captures listeners’ attention.
She plays with tempo on “Until I Met You (Corner Pocket),” singing new lyrics and adding grace notes that stretch and compress the words to make them dance over Mahesh Balasooriya’s mischievous piano. “What A Difference A Day Makes” becomes a bolero, with Corradini whis- pering several verses in Spanish, as Munyungo Jackson adds percussion accents. Corradini sings “Doralice,” Dorival Caymmi’s tale of hope- less love, in Portuguese, against a gentle bossa nova pulse. Midway through the take, the tempo accelerates and her vocals turn the lyrics into a celebration, happy to be leaving the doomed relationship behind.
The set closes with a wild, double-time read- ing of “Lover, Come Back to Me,” McBride and drummer Marvin “Smitty” Smith sending the beat into overdrive. Corradini’s vocals swing just as hard, breaking the melody into staccato fragments that match Zane Musa’s blazing saxophone solo with their animated power. —j.poet
Bridge To Infinity: You Turned The Tables On Me; All Of You; What A Difference A Day Makes; Like Someone In Love; I Could Have Told You; I’m Gonna Lock My Heart (And Throw Away The Key); Doralice; Cai Dentro; If You Went Away (Preciso Aprender A Ser Só); Você E Eu (You And I); É Com Esse Que Eu Vou; Tu Mi Delirio; Until I Met You (Corner Pocket); When The Time Is Right; Lover, Come Back To Me. (64:41)
Personnel: Karina Corradini, vocals; Mahesh Balasooriya, piano; Christian McBride, Rene Camacho (2–4, 5, 10, 13), bass; Marvin “Smitty” Smith, drums; Munyungo Jackson, percussion; Zane Musa, saxophone; Nolan Shaheed, trumpet.
Ordering info: karinacorradini.com

All About Jazz, Interview July 2019 by R.J.Deluke 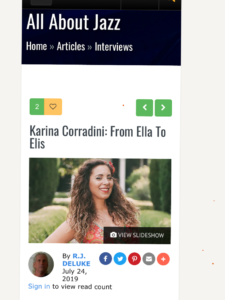 Get to know Karina's musical journey though a lovely, warm and casual interview by Stephanie Patton at KCAW on her show " After Hours" by clicking on this link:

Rich voiced Karina Corradini gives a heartfelt tribute to the spirit and heart of saxist Zane Musa, who tragically died back in 2015. He’s included on this album, and his warm alto and tenor is a haunting dream throughout, playing a rich supporting role along with Mahesh Balasooriya/p, Christian McBride-Renee Camacho/b, Marvin “Smitty” Smith/dr, Munyungo Jackson/perc and Nolan Shaheed/tp. Corradini mixes snappy swingers with luscious Latin with deft. Her work with McBride on “You Turned the Tables On Me” is rich and resigned, while her teamwork with Musa during “All Of You” is a sensuous delight.” Her voice oozes with Musa on “If You Went Away” and is warm as the Caribbean ocean for “Tu Mi Delirio.” She swings and saunters with engaging ease.

Singer Karina Corradini delivers an impressive debut recording with Bridge to Infinity. The multilingual production covers a vast degree of musical territory quite wonderfully and boasts a stellar lineup of sidemen. The production features the talents of Christian McBride and Rene Camacho on bass, Nolan Shaheed on trumpet, Marvin “Smitty” Smith on drums, Mahesh Balasooriya on piano, Munyungo Jackson on percussion and Zane Musa on saxophone. The project is also a tribute to Musa who passed away prior to the release of the effort. Corradini is a solid talent who has overcome many obstacles and has a bright musical future.

Literally and figuratively, singer Karina Corradini has crossed many bridges. She made the journey from Buenos Aires, Argentina to Los Angeles. She has bridged the divide between pop music and jazz as well as Latin and Brazilian music with jazz. With Bridge to Infinity: Tribute to Zane Musa, Karina Corradini crosses a major bridge – she takes her music out internationally with her debut CD available on her website www.karinacorradini.com.

While Flora Purim is from Brazil, I cannot resist a favorable comparison to Flora for Karina Corradini. Karina exudes similar strength, restrained use of vibrato, supple phrasing, well-considered risks and natural sense of swing. One couldn’t help but swing accompanied by this ace band: bassist-arranger-producer Christian McBride, fellow bassist Rene Camacho, drummer Marvin “Smitty” Smith, percussionist Munyungo Jackson, pianist Mahesh Balasooriya, trumpeter Nolan Shaheed and recently deceased saxophonist Zane Musa. I’m so sad that I’m only now learning about Zane Musa through Corradini’s debut CD. He’s a consummate, original bebopper and a warm, breathy, convincing balladeer. Throughout the disc you sense the mutual appreciation Corradini and Musa shared. It’s top quality from start to finish. My personal favorites are the rare Jimmy Van Heusen ballad I Could Have Told You, the bright and bouncy treatment of Dori Caymmi’s Doralice, the unbridled swing of Until I Met You (Corner Pocket) and When the Time Is Right penned by Howlett “Smitty” Smith. This is the first time anyone has recorded this gem and I hope it is not the last. I hope you’ll join me in welcoming Karina Corradini as she crosses yet another bridge with Bridge to Infinity: Tribute to Zane Musa.

FROM VISIONARY TO INFINITY: JAZZ IS THE CATALYST
BY Dee Dee McNeil/Jazz Journalist
March 6, 2019

During March, I continue to celebrate Women’s History Month by including several reviews of women in jazz. I’m also including some very talented men who have new recordings on the market. Daniel Szabo gives us a taste of his visionary work by arranging new music for jazz trio and chamber ensemble. Karina Corradini tributes the late Zane Musa with her “Bridge to Infinity” album. Cathy Segal-Garcia joins Larry Koonse and Josh Nelson as they travel to “Dreamsville.” Kevin Hays and Chiara Izzi meld pop, smooth jazz and world music on their CD, “Across the Sea.” Quinsin Nachoff’s Flux group colors way outside the lines with “Path of Totality.” Cyrille Aimee celebrates the music of Sondheim and Settings for Three sits us down at the table of Drew Gress, Phil Haynes and David Liebman for some delicious be-bop and straight-ahead. This column reviews the artistic diversity of jazz and music in general, while introducing you to new artists and seasoned veterans.

KARINA CORRADINI – “BRIDGE TO INFINITY” A tribute to Zane Musa

Right from the first cut on this album, “You Turned the Tables On Me,” Karina Corradini, shows that she can ‘swing’ with the best of them. This vocalist has surrounded herself with a host of marvelous musicians including Christian McBride on bass (who co-produced this album), Mahesh Balasooriya on piano, Nolan Shaheed on trumpet and Munyungo Jackson on percussion. She is tributing her beloved friend, reedman Zane Musa, who left Earth much too early. Zane Musa put his saxophone blessings on this recording before his passing. Ms. Corradini sings a number of great old standards, with rich arrangements and great sincerity. Her lyrics are tinged with just the hint of an accent and I wondered where she’s from. When she sings, “What A Difference A Day Makes” in Portuguese, I hear her Brazilian roots shine through and flower. But I discover (from her publicist) that she is not Brazilian at all, but instead is a mixture of Argentinian and Italian, born in San Isidro, Argentina. Still, she delivers a lovely rendition in both English and Portuguese. I enjoyed the slow, swaying Samba rendition of “I Could Have Told You,” with Munyungo Jackson’s warm, percussive additions highlighting the rhythm and an outstanding solo by Mahesh Balasooriya on the eighty-eight keys.
On “Doralice” by great composer, Dorival Caymmi, Karina Corradini is back to Portuguese and the up-temp, happy excitement of Brazilian music is infectious on “Cai Dentro.” Marvin “Smitty” Smith is the catalyst that pushes the music ahead on trap drums and locks a tight groove with Christian McBride on the bass. Ms. Corradini used the arrangements of Eric Bulling, who penned them for Ella Fitzgerald’s album, “Ella Braca Jobim.” When Karina Corradini settles down to deliver the beautiful ballad, “If You Went Away,” her delivery makes me want to fall in love again. This is an elegant, sincere vocalist who knows how to sell lyrics and deliver them with the tone and emotional fortitude that keeps an audience engaged and captivated.